Dethatching a lawn is one of the many maintenance tasks that can be undertaken in order to keep your lawn looking fresh, healthy and preventing it from developing further problems.

Whilst dethatching sometimes requires specialist tools and equipment, it can be done fairly easily with a rake providing the correct adjustments are made.

Dethatching is a term used to describe the removal of a layer known as “thatch” from a lawn. Thatch is made up of matted debris that may be lying in your lawn. This includes dead grass, weeds, thin roots or any other organic matter that may entwine. Thatch often rests just below the surface of the grass, but above the soil, almost like a carpet. Whilst not dangerous, thatch can pose some risks to the health and look of your lawn, as it can suffocate it and hinder growth.

Dethatching is completed to remove the thatch from the lawn, and break it up enabling the soil and grass to breathe.

Where Does Thatch Come From?

Thatch is a buildup of organic material which becomes entwined and carpets the base of a lawn, just above the soil. As a result, thatch is usually created from off clippings from mowing, any plant matter which may fall onto the lawn, roots, and dead grass. As it is completely natural, thatch can sometimes be hard to prevent, but knowing what causes it can help you put some precautions in place. Thatched lawn can occur when there has been poor aeration, too much fertilization, a lack of worms working in the soil, or if the soil’s pH balance is off. When undergoing any treatment or adding new product to your lawn, make sure you check your soil’s pH beforehand to check if the treatment is an adequate one that will work well with your lawn. Knowing how to raise or lower your soil’s pH could come in handy in the future.

When Should I Dethatch my Lawn?

Dethatching your lawn can be a somewhat time consuming process, so it’s more beneficial to do it when necessary. The best way to determine whether or not to dethatch your lawn depends on the thickness of the thatch below. Generally speaking, ½ and inch is normal for thatch, but beyond 1 inch is when it could begin stifling your grass. As a result, dethatching your lawn should be a consideration once it has reached a thickness of 1 inch. You can determine the thickness of your lawn’s thatch by digging a small wedge up from the garden using a trowel or spade. From the wedge, you should be able to determine the different layers of your lawn, including the grass, thatch, and soil. If the thatch is thicker than 1 inch, then it needs to be dethatched.

What are the Benefits of Dethatching?

Dethatching can help improve the health and look of your lawn. Thatch that is thicker than 1 inch can have very negative effects on a lawn due to the fact that it acts as a barrier for any new sustenance getting into the soil. This could potentially mean that fertilizer, water, and potentially sunlight could be blocked out by a thick layer of thatch, preventing growth or disease prevention. Over time, thick thatch can kill lawn by effectively suffocating it, and can potentially stop new grass from growing in the same soil. This is because the grass roots will also become entangled in the thatch, and can affect further new growth. Dethatching can also prevent issues pertaining to standing water, which in turn keeps insect populations such as mosquitoes down.

Dethatching a lawn not only makes the lawn look and feel better, but it also helps prevent potential damage which can occur as a result of suffocation.

How to Dethatch a Lawn

Dethatching a lawn can be achieved in a multitude of different ways, with specialist equipment or just tools you may already have lying around, such as a rake. There are a few steps that need to be taken first, regardless of your dethatching method of choice.

Before beginning to dethatch, make sure you mow your lawn to half height. This ensures that the thatch is easier to reach with your tool of choice, and also gives you an even playing field.

After mowing the lawn to half of its usual height, make sure it is watered. Watering your lawn at this point allows for the soil to moisten, meaning that it is easier to dethatch.

There are additional steps you can take when dethatching a lawn which will improve your lawn’s condition greatly.

Dethatching a Lawn With a Rake

There are different types of rakes on the market, and ones that are specifically made for dethatching. It is entirely possible to dethatch a lawn using a regular rake – if you know how to do it. Whilst the result may not be as good as a specialist dethatching rake, it can help break up some areas of thatch.

Dethatching with a Leaf Rake

A leaf rake is not the most reliable option when it comes to dethatching, but it can help with some areas of the garden. If your thatch isn’t much thicker than an inch, it should be able to remove some of it to allow for some relief. Dethatching with a leaf rake is the same as dethatching with a specialist rake, but just be aware that the results may be noticeably worse.

Dethatching with a Thatching Rake

Thatching rakes are the cheapest and most versatile method of dethatching a lawn, but they require the most manual labor. They work similarly to how leaf rakes scoop up leaves, except they break up and scoop up thatch. A thatching rake should be dug deep into the lawn and rip up the thatch that is covering it. This can take some time depending on the size of your yard.

Other Ways to Dethatch a Lawn

Whilst rakes are the easiest and cheapest way to dethatch a lawn, certain issues may arise from them. Perhaps the job will take too long, or is too physically demanding. Luckily, there are some alternatives to rakes which will also help reduce the amount of thatch in your garden.

Dethatching with a Power Dethatcher

A power dethatcher is a piece of equipment that is trundled across the lawn, similarly to combine harvesters, but on a much smaller scale. Power dethatchers come in different sizes and are the most effective way of dethatching a lawn quickly and efficiently. Before using this device, make sure that everything is marked or flagged to ensure that no damage is caused by the power dethatcher. It’s also important to follow a route which only covers the grass once over to prevent additional damage to the lawn.

Vertical mowers are simply run across the lawn in one direction, and back again in a perpendicular direction in order to pick up thatch. Similarly to other dethatching methods, this one leaves a lot of debris on the grass which will need to be removed.

Should you Rake a Lawn After Dethatching?

After dethatching, you can expect to see a lot of debris on the grass. Whilst this isn’t a good look, it can be easily removed by gently raking it up and disposing of it or composting it. Rake this debris up gently, as you would do with leaves. It’s best in this case to use a leaf rake as opposed to a thatching rake, to prevent further damage.

Whilst dethatching with a regular leaf rake may not be the best idea, it is possible to do if the area is small enough and the thatch doesn’t exceed more than an inch and a half. The best option if you are insisting on using a manual rake is to invest in a thatch rake which is specially designed to dethatch lawns as effectively as a manual tool can. 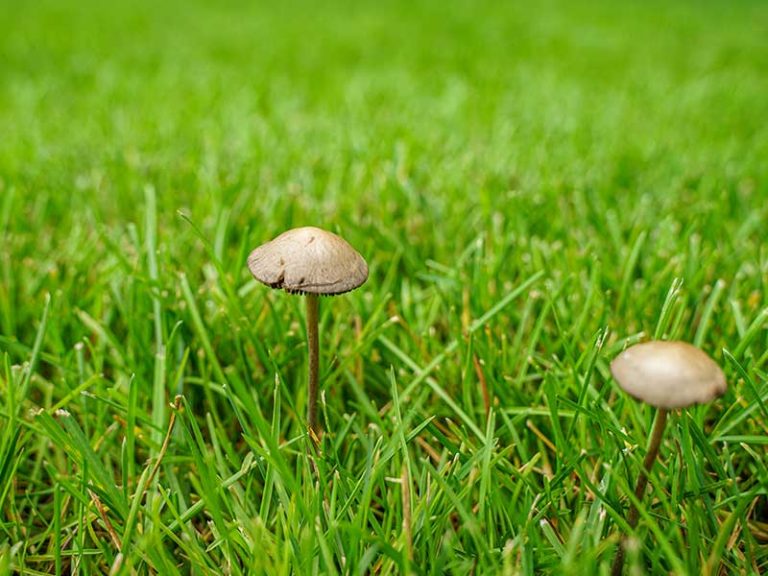 There are many reasons that you might not want mushrooms in your lawn; they can be unsightly, and if you have pets or small children, you might be concerned for their safety in terms of accidentally ingesting the mushrooms. Mushrooms normally occur in damp, shady conditions, and their fruiting bodies (the part you see) can… 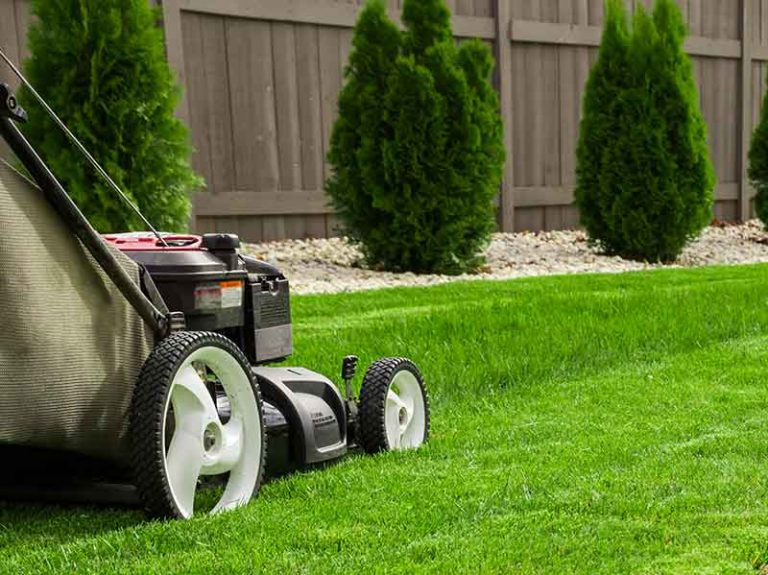 When entering the world of lawn mowers, it’s possible to become overwhelmed by the amount of variety there is on offer. Each lawn mower has its own unique features, benefits and disadvantages. When deciding on which mower is best suited for your lawn, one must consider the facts surrounding your circumstances. Small yards don’t often… 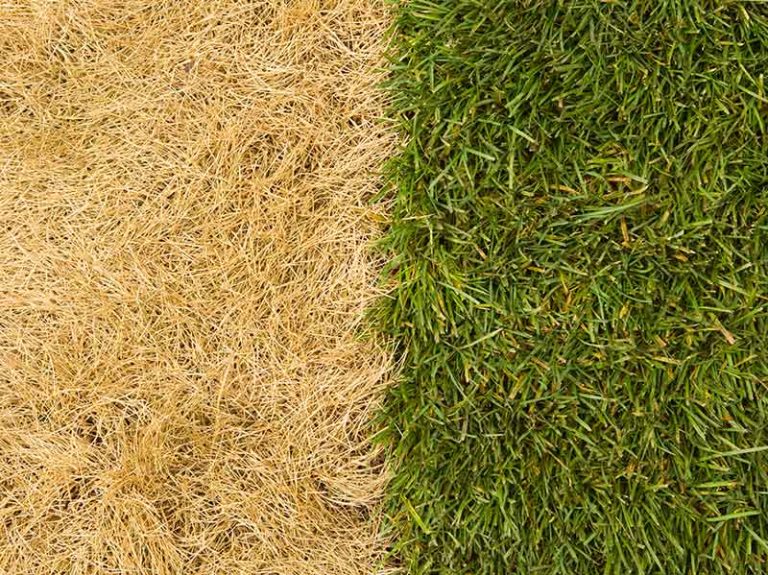 Bleach is a useful and versatile cleaning agent in the house, but what about when you apply it to the garden? Does it kill grass, and what about other plants? The answer is that bleach will certainly kill grass, especially in large quantities, and you won’t see it grow back quickly either. You might want… 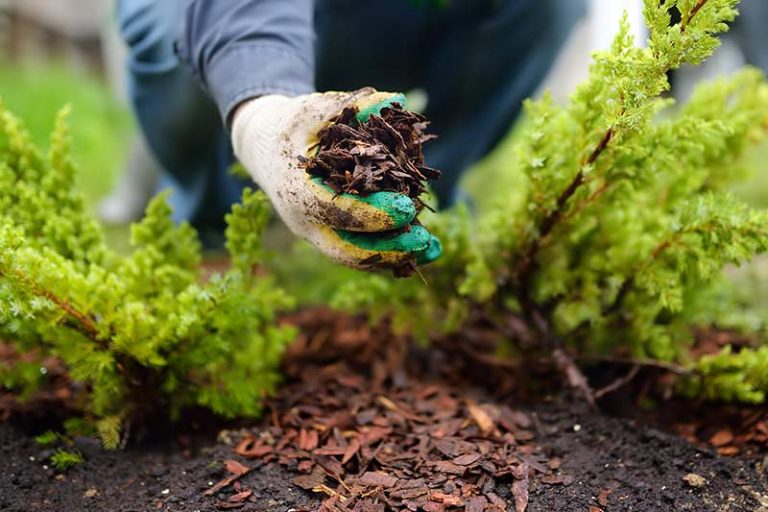 In the simplest terms, mulch is the name given to any loose material that can be laid across the surface of soil to act as a protective covering. By mulching the soil around your new or established plants or grass, you provide your lawn or garden with a host of various benefits that help to… 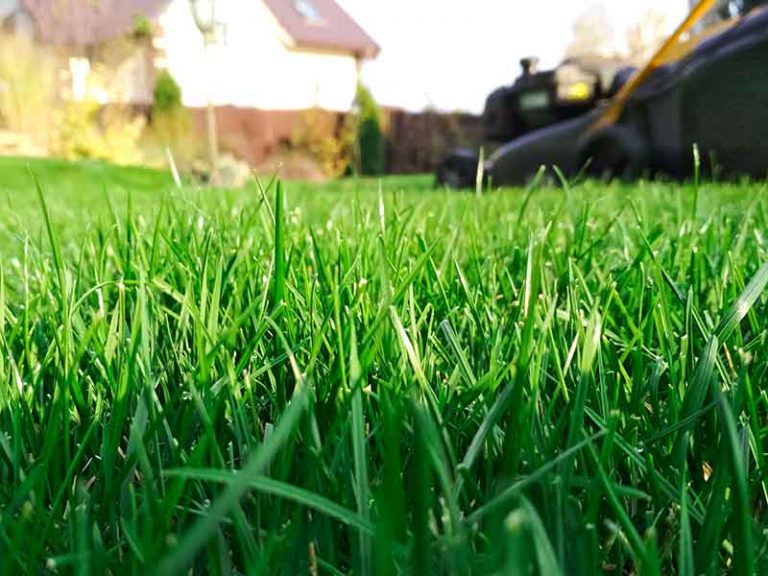 If you’re looking at the lawn and thinking about how it needs cutting yet again, you might start yourself on a path of wondering how tall can grass grow (and when to cut your lawn). For anyone who has wondered, different grasses grow to very different heights – and this is a huge family. For… 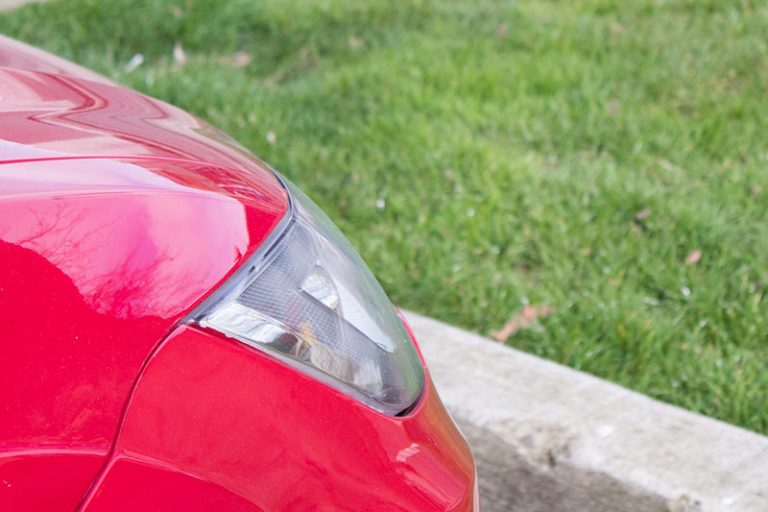 Whether you’re dealing with some invasive neighbors, or you regularly host events that attract a lot of drivers to your property, your lawn will wear out quickly under regular traffic from their heavy cars. You don’t need to fret – there is a variety of ways you can create a barrier to prevent people from…