Scarification and dethatching are two terms that are often used interchangeably. Although these are two very similar lawn care practices, they differ slightly in their processes and the effect that they have on your grass. They also require slightly different tools; scarification utilizes a scarifier, while dethatching involves the use of a dethatcher.

In short, dethatching is a simpler form of scarification that is less taxing on the grass. When deciding which tool to use on your lawn, i.e. a scarifier vs a dethatcher, you need to consider a few factors to choose the best method for your grass. You must consider aspects such as the purpose of each process, the effect each process has on the lawn, and the recovery time necessary after carrying each process out.

What is a Lawn Scarifier?

A lawn scarifier is a piece of gardening equipment that digs into the lawn to reduce thatch and dislodge other lawn debris on the soil surface. The term scarification comes from the action the scarifier has on the lawn, as it creates holes or ‘scars’ in the turf.

Scarifier tools have a set of sharp metal blades on a rotating cylinder that pierce down into the turf. The vertical slicing action of the scarifier digs into the lawn to pull up the thatch and dead organic matter. Some models of scarifiers also have collection bins that collect the thatch as you operate the equipment; this reduces the amount of effort you have to put into the clean-up process after scarifying. Other models even offer the ability to adjust the blades for different cutting depths.

When scarifying the lawn, the objective is to free up the grass’ roots from thatch and debris that accumulates on the soil surface. This layer of organic matter blocks air, water, and nutrients from reaching your grass’ roots.

Benefits of Using a Scarifier

What is a Dethatcher?

Dethatchers pull up thatch as you operate them around your lawn. There are several different types of dethatchers, including dethatching rakes, motorized dethatching machines, and dethatching mower attachments. Each tool is best suited for different sizes of lawn.

The objective of dethatching is similar to scarification, i.e. to free up grass roots’ from an obstructive thatch layer. It is essentially a simpler form of scarification that only tackles the thatch layer rather than the underlying debris.

Benefits of Using a Dethatcher

Comparing scarifiers vs dethatchers, the two tools are very similar and serve the same basic purposes. The main difference between these tools is that a dethatcher only tackles the uppermost thatch layer, while a scarifier digs deeper to pull up the entire thatch layer and any other debris beneath it. Dethatching is basically a lighter, less intense form of scarification.

We have discussed the differences between scarifiers and dethatchers in more detail in the following sections.

1. Tools Used in Each Process

Scarifiers are tools that have sharp metal blades on a rotating cylinder that act like knives to cut into the thatch and upper turf layer. These tools leave behind holes in the soil, in addition to pulling up the thatch layer.

Types of scarification tools include:

Dethatching tools are very similar to scarifiers, but they’re more simplified and require less effort to operate. They also feature tines on a rotating cylinder that pierce into the thatch layer to pull up the thatch.

Types of dethatching tools include:

2. Purposes of Each Process

Scarifiers are used for more purposes than dethatchers. These purposes include:

Dethatchers are simpler to use but are used to achieve fewer purposes than scarifiers. These tools are limited to:

3. Effect Each Process Has on Lawn

Scarification is a more intense process that will have a greater effect on the lawn. Scarifiers pull out the entire thatch layer, as well as removing all other debris below this layer.

After the scarification process, your lawn will be a lot more delicate than it would be after dethatching. Removing the entire thatch layer may allow harmful organisms and burrowing insects like grubs to enter the soil.

Dethatching is easier on the lawn as it only removes some of the thatch layer, leaving behind a small amount of thatch.

Although a thick thatch layer is detrimental to grass, a light amount of thatch is actually beneficial; a light thatch layer helps to regulate soil temperature, in addition to behaving like a mulch and slow-release organic fertilizer.

4. Lawn Recovery After Each Process

Again, as scarification is more of an intense process, it will uproot much of the grass and may damage healthy roots. This means that the lawn will take longer to recover after the scarification process.

If you have the patience, scarification will still leave you with an aesthetically improved lawn once it recovers.

Although dethatching can uproot some of the healthy grass, it is generally much less damaging to your lawn than scarification.

With the majority of the grass roots unaffected, the lawn will recover much more quickly from the process. This makes dethatching a better option if you want to improve the look of your lawn in a shorter amount of time.

When to Scarify or Dethatch a Lawn

There are different scenarios in which scarification and dethatching are better suited.

When to Scarify a Lawn

If you fit any of these scenarios, you should scarify your lawn:

When to Dethatch a Lawn

You should instead dethatch your lawn if you fit any of these cases:

How to Scarify or Dethatch a Lawn

We have explained the basic steps of both scarification and dethatching below.

How to Scarify a Lawn

2. Mow the lawn right before you scarify it. This will ease the labor involved in operating the scarifier.

3. Set the blades of your scarifier on a higher setting, then make a pass over your lawn in one direction.

4. Set the blades of your scarifier slightly lower. Make a second pass to scarify the lawn, doing so in the opposite direction to the first.

5. Lower the blades of your scarifier once again, before making a third pass over your lawn. For scarification to be effective, you need to make at least 3 passes over the area.

How to Dethatch a Lawn

2. Mow the lawn before dethatching. This will make it easier to use the dethatching equipment on your grass.

3. Use your chosen dethatcher to begin breaking up the thatch layer. If using a manual rake, push it deep into the thatch layer before pulling it up. Pass your equipment over the entire lawn in one direction.

4. Repeat the previous step by making a pass with your dethatcher in the opposite direction to the first.

5. Dethatch the area 2 to 3 times, or until you reduce the thatch layer to a suitable thickness.

If you live in the south or a warm transitional region in the US, you’re probably considering several different warm-season grass types for your lawn. Two popular types of warm-season grasses are zoysia grass and Bermuda grass. While these grasses share similar characteristics, they are better suited for slightly different conditions as they vary in… 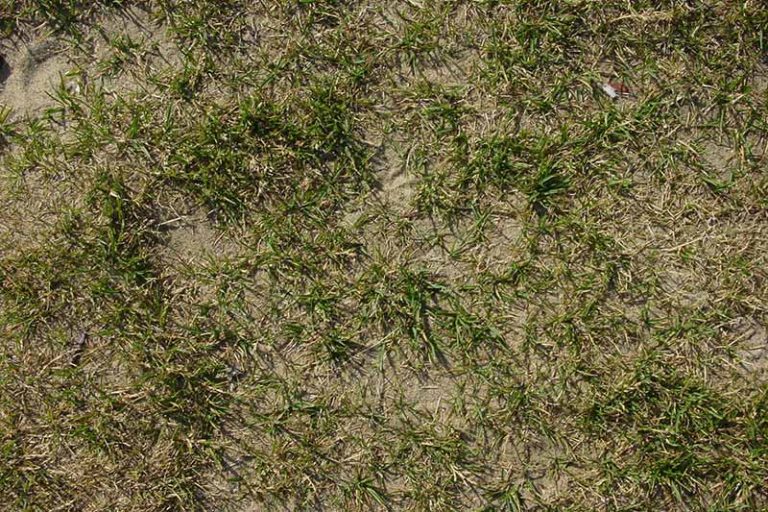 Sandy soil can be a challenging soil type to grow grass in. The structure of this soil type means that it struggles to hold onto water and nutrients well, which is a crucial requirement when trying to grow grass or maintain a mature lawn. However, with the right maintenance, seed type, and planting method, it’s… 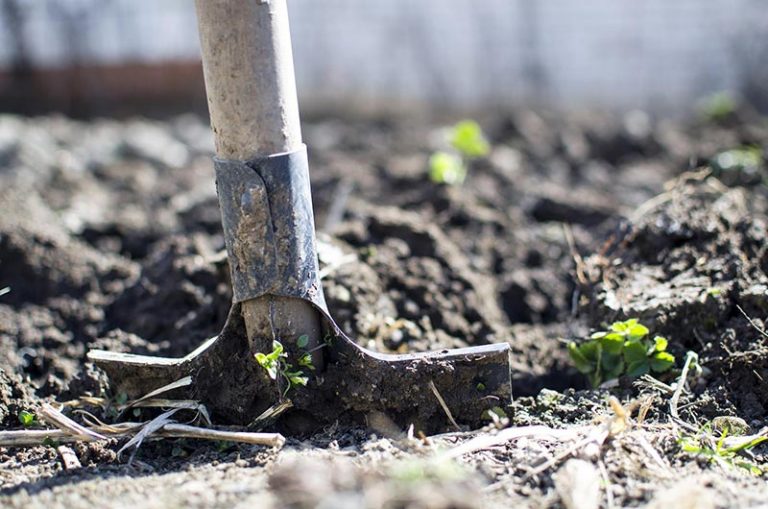 Whether you’re making space for a planting bed or you want to start your lawn from scratch, removing the grass will give you a fresh new bed to work with.  There are several methods you can use to remove grass from a lawn. To remove grass for a garden bed, it’s best to dig up… 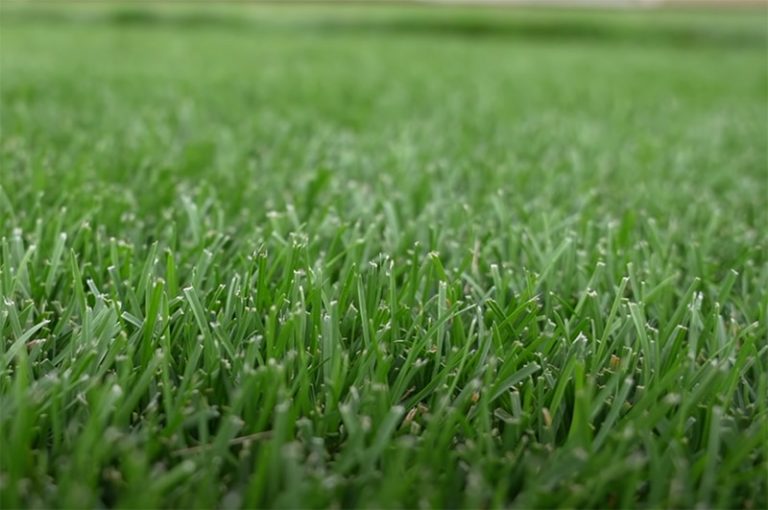 For those that live in the northern and transition states in the US, there are many cool-season grass types to choose from when trying to grow a healthy lawn. Two of the most popular cool-season grasses are Kentucky bluegrass and tall fescue; although they share some similarities, these grasses have different properties in their growth… When kept in healthy condition, St. Augustine grass should form a thick, carpet-like lawn, free of bare or patchy areas. So, if you’ve noticed that areas of your St. Augustine lawn have started to die off, you’ll need to do some investigative and reparative work to find out the potential sources of the problem and… 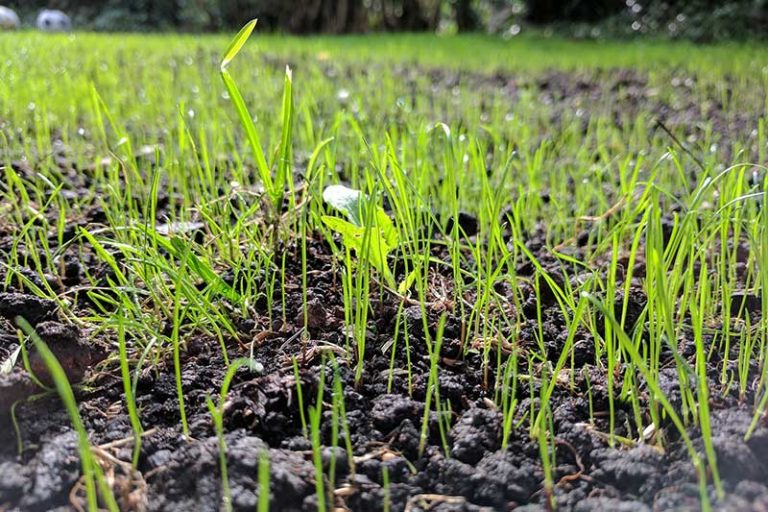 When you break it down, there’s much more to soil than meets the eye. Being composed of small particles of rocks, minerals, humus, water, and air, soil is a self-sustaining concoction of both living and dead materials. Determined by the natural landscape of the area, this composition varies from yard to yard, and therefore so…