Do you know that using a choke can save your lawnmower from damage in the long run? Chokes play a vital role in any fuel-consuming engine. They are usually found in the various types of lawnmowers available. Read on to find out more.

The primary purpose of a lawnmower choke is to restrict airflow in a fuel combustion engine. It modulates the amount of air exchanged in the engine, allowing for more fuel than air to be used in the combustion process.

This improved combustion process makes it very easy for your lawnmower’s engine to ignite and start. While choke valves are essential, they should only be used when necessary as they can cause the machine more harm than good when they are utilized too frequently.

Table of Contents show
1 What Does a Lawnmower Choke Do?
2 How Does It Work?
3 Where Is the Choke Located?
4 What Happens If you Leave The Choke on?
5 Is My Lawnmower Choke Manual or Automatic?
6 What Control Symbol Indicates the Choke?
7 Choke Maintenance
8 FAQS
8.1 Can I Operate a Lawnmower Without a Choke?
8.2 Is There a Problem If My Lawnmower Only Runs on Full Choke?

What Does a Lawnmower Choke Do?

If you’re a homeowner who mows your lawn, you will agree that the easy starting of your lawnmower’s engine is always a delight. You may not know about this smooth-running because the choke is very important. There are different types of chokes on different types of lawnmower engines. Some have automatic choke valves, while others have manual choke valves. Whichever type your machine has, its function is to manage the air to fuel ratio in the carburetor. All combustion engines have a choke valve, whether automatic or manual.

How Does It Work?

While most combustion engines have a choke, some have a primer bulb. It performs the same function as a choke by releasing more fuel into the engine for combustion.

When the metal in the engine warms up, it burns fuel more readily than when it is cold. When your lawnmower hasn’t been active, the engine is excellent. Turning on the engine of a lawnmower when it’s still cool is referred to as a cold start.

Where Is the Choke Located?

The choke is usually a button or lever on the body of your lawnmower. It’s usually located on the left-hand side of the machine. However, this might differ in some models. Check close to the air intake, adjacent to the carburetor. If you’re still not sure about what you’ve found, all you need to do is follow the wire that leads the trigger to the engine. You’ll find your choke at the end. It is straightforward to use as pictures indicating the various airflow levels are usually pasted right above or below it. Use the picture as a guide – turn the lever up or down, or left or right. It depends on how it’s positioned on the mower. Over time, you get so used to it that you might not need to check the picture instruction to know where to move the valve.

Typically, the throttle should be closed when the engine starts cold and progressively opened after a few seconds. Leaving open or closing your engine’s choke will depend on your lawnmower.

What Happens If you Leave The Choke on?

Nothing good, that’s what. Once your mower has started and warmed up for a few seconds, turning off the choke is essential. If this isn’t done, it will consume more fuel within a shorter period, which could cause engine overheating. Also, leaving the choke on for an extended period on a machine that’s already running will result in your mower giving off black smoke from the exhaust, a sluggish performance, and a shortened mower lifespan. The following are some possibilities for why this can happen:

Flooding is one major problem choke systems have. Suppose the choke is left on after the engine has warmed up, even for a short period, more fuel than needed might get into the combustion chamber. As a result of this, the engine may stop running. Once the chamber has been flooded, draining the excess fuel can be daunting. Sometimes, if the choke has been left on for too long after the engine has started, it might be necessary to open up the engine and empty it to get it started. Also, a faulty choke could cause your combustion chamber to flood.

If the flooding of your engine isn’t severe, it could have an easy fix. Getting your lawnmower to come on when the engine is flooded is almost impossible. However, you’ll probably be able to get your engine to come on with this neat trick; instead of repeatedly pulling the chord with the choke fully open, pull it until your mower is on the verge of starting. If you feel your machine might begin on the next pull, move the choke till it’s half-open. This will allow airflow into the engine and prevent the likelihood of flooding.

One significant side effect of flooding is a clogged carburetor. A sign of this is when your lawnmower starts when the choke is on but stops working when you put the choke off. This happens when there is debris from the excess fuel blocking the fuel lines in the carburetor. The only way to fix this is by cleaning or replacing it altogether.

Is My Lawnmower Choke Manual or Automatic?

We’ve established before that different lawnmowers have different types of chokes. The newer lawnmower models have automatic chokes, making it very easy to operate the machine. They are temperature sensitive and activate automatically at ignition. They’re called “automatic” because they open and close on their own as needed by the engine. For lawnmowers with manual chokes, you would need to shift a lever, switch, or button to operate them. While automatic chokes are getting increasingly popular among manufacturers and consumers alike, several people prefer to get lawnmower models with manual chokes.

How do you then tell if your lawnmower choke is manual or automatic? Before you purchase a lawnmower, you should make inquiries about the model and specifications of your machine. If it’s not a new lawnmower, or someone gave it to you, you can easily find out the type of choke it has by going through the manual or inspecting the body of your machine for any choke lever or button.

What Control Symbol Indicates the Choke?

The choke symbol is usually printed on stickers placed right where you can find the choke on a machine. This helps users quickly locate it. Manufacturers all around the world use different symbols to indicate the choke. However, there are a few that are widely used:

It’s not shocking that you need to regularly check your choke and perform maintenance on it. If this isn’t done, you’ll have issues with it in the long run. However, let’s talk about what to do when your choke lever breaks off.

Removing and replacing a choke lever is relatively easy and doesn’t require any tools. The lever fits into a hole on the machine, so all you have to do is screw it loose or pull it out of the holes. Make sure to replace the lever with a new one of the same type and size. Once this is done, your lawnmower is ready to be used again.

Can I Operate a Lawnmower Without a Choke?

The answer to this is simply no. A Lawnmower, whether automatic or manual, can’t be operated without a choke. The choke is essential because it helps regulate the amount of air entering the carburetor and supplies more fuel into the fuel compartment for ignition.

Is There a Problem If My Lawnmower Only Runs on Full Choke?

Yes, this is a huge problem, and it does not bode well for your lawnmower. If your machine only runs on full choke, its fuel delivery system or carburetor is faulty. If your engine needs the choke for more than 4 minutes to stay on, there’s a problem somewhere. 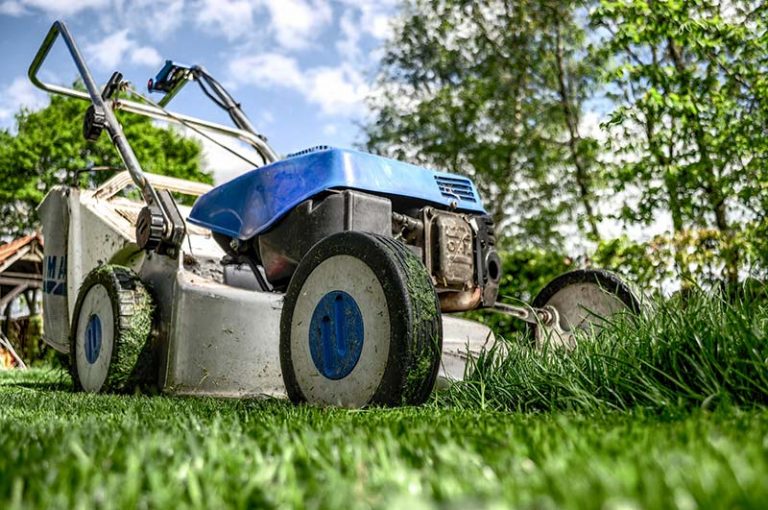 Being one of the most fundamentally crucial practices for the health of your lawn, its essential for any homeowner to know how to properly mow a lawn. Proper mowing ensures that you have a lawn full of grass plants that are not only aesthetically pleasing, but also highly resistant to the stress from drought, frost,… 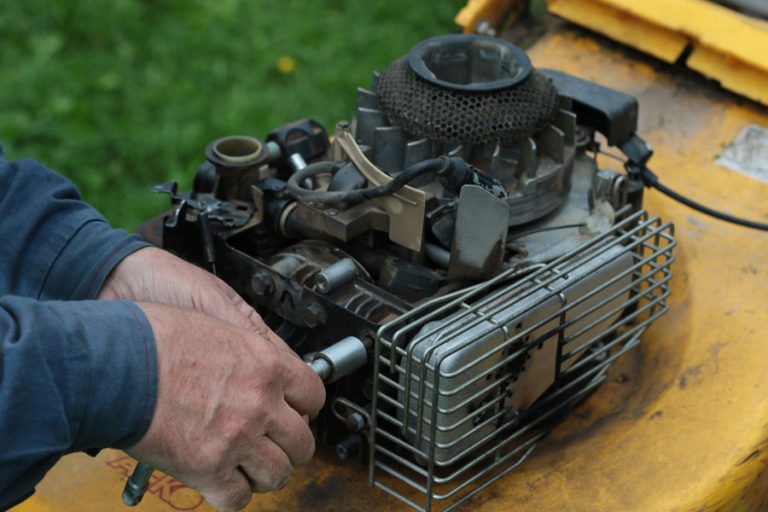 Lawn mowers usually require a level of maintenance each year. This is due to the lack of use they receive in winter time, which can lead to damages and issues preventing them from working correctly. One of these maintenance tasks usually involves changing the lawn mower’s spark plug, as it is one component of the… Although they’re designed for outdoor use, lawn mowers are far from being waterproof. Whether it’s an electric or gas-powered mower, both have water-sensitive parts susceptible to damage if the mower is left or used in the rain.  In summary, you should avoid letting your lawn mower get wet whenever possible. Not only might you damage… 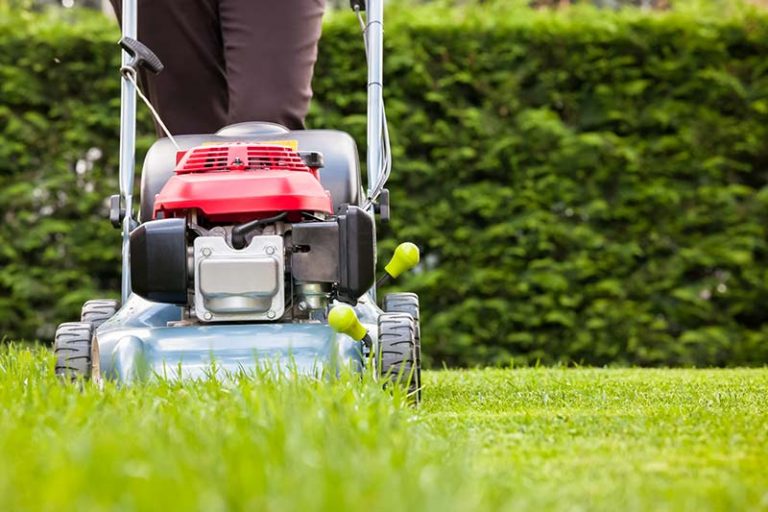 The height at which you cut your grass is one of the most important factors when it comes to the overall health and appearance of your lawn.  In general, the best height to cut grass is around 2 to 4 inches tall. With that said, many factors should be considered when determining the best height… 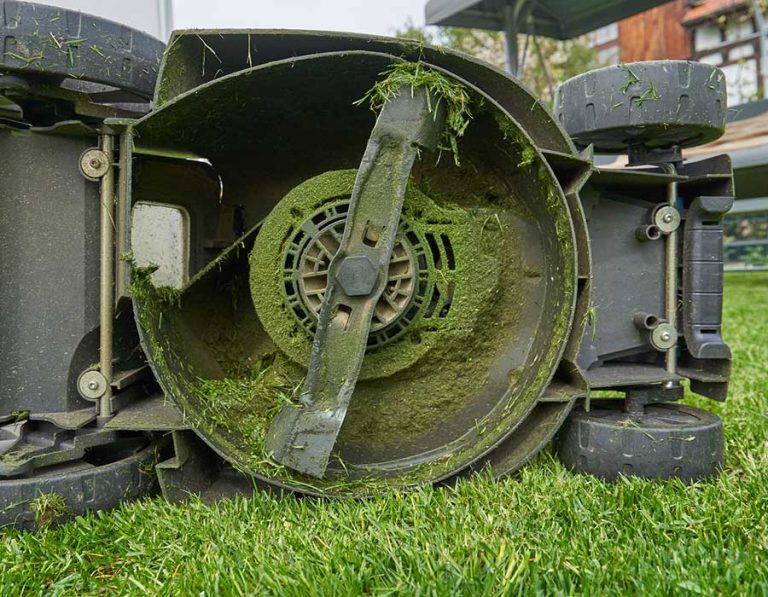 A lawnmower’s function is to trim the grass in your yard, making it a neat, pleasing appearance. The part of the mower that does the cutting is the blades which have to be well maintained. Blunt lawn mower blades will give the lawn an uneven trim, and unbalanced blades will cause the lawnmower to vibrate…