A few days ago, I asked my son to help me to mow the lawn. I was faced with a predicament when it was brought to my attention that there was insufficient lawnmower oil. It was then that the question arose, can you use car oil in a lawnmower?

While is possible to use car oil in a lawnmower, certain factors need to be considered before making the final decision. These include the type of lawnmower you have, the type of engine it has, and the outside temperature.

Let’s explore what will happen if you use car oil in a lawnmower and gain insight into the most suitable car oils used in a lawnmower, considering the above factors that will affect this decision.

The Effects Of Using Car Oil in a Lawn Mower?

Use Of Car Oil In A Two-Stroke Lawnmower Engine

If you use car oil in a two-stroke lawnmower engine, you will cause damage to the engine and its components. This motor requires a different type of oil that is generally lighter inconsistency.

This type of lawnmower oil is manufactured specifically by the brand, which also specifies lightweight alternative oil with designations such as NMMA – TCW3, based on service classifications provided by the American Petroleum Institute.

Using car oil in a two-stroke lawnmower can clog the engine and cause the engine to struggle to move forward, which can have serious implications causing damage to the engine.

Use Of Car Oil In A Four-Stroke Lawnmower Engine

If you use car oil in a four-stroke lawnmower engine, your engine will run normally, provided that the type of oil is as specified in the owner’s manual. A four-stroke lawnmower is generally compatible with most car oils that meet the engine specifications to work well without risking damage to the lawnmower.

However, the use of the wrong oil will hinder the optimum performance of the lawnmower and risk future damage to the lawnmower, which could be irreparable. Your car, unlike your lawnmower, can handle a lower quality oil.

It is one of the factors that you will need to take into account when choosing the quality of the car oil to be used in your lawnmower; using the incorrect car oil can be the deciding factor of the lifespan of your lawnmower. Below is a list of car oils that you can use in a lawnmower.

Different Types Of Car Oils Used in a Lawnmower

Using SAE 30 in A Lawnmower

If you opt to use car oil in a lawnmower, the SAE 30 would be the most common choice. According to the Society of The Automotive Engineers, it was designed specifically for smaller air-cooled engines, making it compatible with lawnmowers. It is ideally suited for warmer temperatures as well as older lawnmower engines.

The outside temperature should be between 40° – 100°F or 4° – 38°C for this grade of car oil to be used in the lawnmower. Temperature below 40°F or 4°C will result in hard starting of the lawnmower.

Although used in varying temperature conditions, the SAE 10W-30 is a more suitable choice for cold weather. It is also more compatible with modern lawnmower engines.  However, the use of this grade of oil can increase oil consumption, resulting in the use of more oil than you would have initially budgeted to use.

The SAE 5W-30 is used during all temperatures. The use of this grade of oil also helps decrease oil consumption, which helps you optimize savings.

Using Vanguard 15W-50m In A Lawnmower

Suitable for commercial use and use on thicker lawns. The outside temperature should be between 20° to 120°F or -7° to 49°C for this grade of car oil to be used in a lawnmower.

Using Synthetic 5W30 In A Lawnmower

See our article What Kind of Oil Does a Lawn Mower Take for a thorough breakdown of the different types of oil you can use in a lawnmower.

Is There a Difference Between Lawnmower Oil and Car Oil?

Although there is not much difference between lawnmower oil and car oil, checking the owner’s manuals is advisable before using them. The small lawnmower engines are sensitive to additives and alternatives. Typically the most common oil used for lawnmower and car engines would be the straight SAE 30 weight oil or the multi-viscosity 10W-30 oil.

Along with knowing which type of oil to use in your lawnmower, it’s good to know how often you should change your lawn mower oil.

Effects of Using the Wrong Car Oil in a Lawnmower

Most lawnmower engines lack pressurized oil pumps; hence they use a splash system. Most multi-grade car oils are designed to be very thin and specifically used for cold climates.

If you select a car oil grade in summer with a low W (designed for winter), it will be too thin for the splash system because the oil will run off too quickly and not lubricate the lawnmower engine effectively. The outside temperature has an effect on the oil temperature of the engine.

Cold weather can affect the viscosity of the engine to drop considerably, restricting the oil from moving around to freely coat the moving parts, thus diminishing its lubricating ability. The poor lubrication can cause dust particles to get trapped in the engine, eventually causing the engine to cease. It is therefore advisable to use a single grade such as the SAE 30.

Motor oils are made from a heavier, thicker petroleum hydrocarbon base stock derived from crude oil. Draining and replacing oil is especially important because oil carries away the ash and carbon caused by combustion in the high-temperature whirlwind of the mowers’ small engine.

How to Fill Car Oil in a Lawnmower?

Follow these steps to correctly fill your lawnmower with car oil:

Car oil is often updated to modern standards, so replenishing the oil in your lawnmower with it based on the specifications of the owner’s manual will probably prove highly beneficial for the longevity of your lawnmower.

Choosing the best quality car oil is imperative. The most suitable option would be the SAE 30. You may be able to find cheaper synthetic options on the market; however, it would not be worth compromising the long-haul sustainability of the lawnmower. 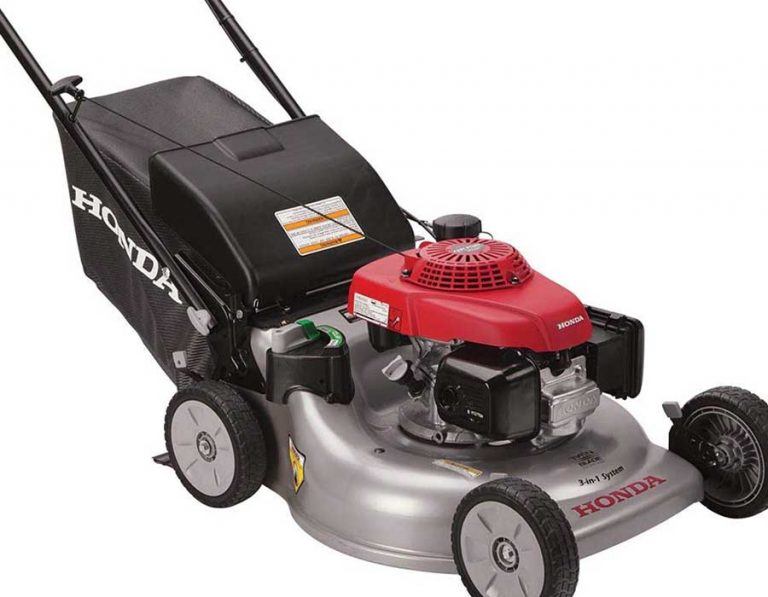 Has your Honda lawn mower failed to start? Well, this is not an uncommon occurrence. Your lawn mower not starting is a sign that something is wrong with a component or more. You cannot precisely tell what the problem is at surface level, so the first thing to do is run checks. Most of these… 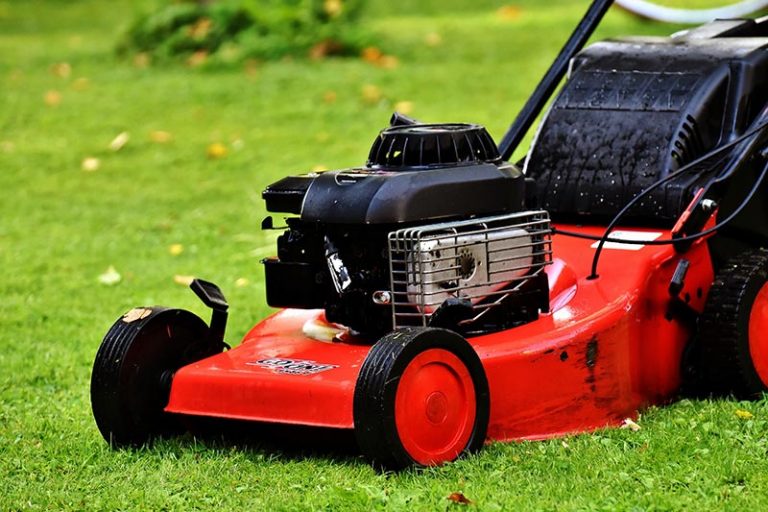 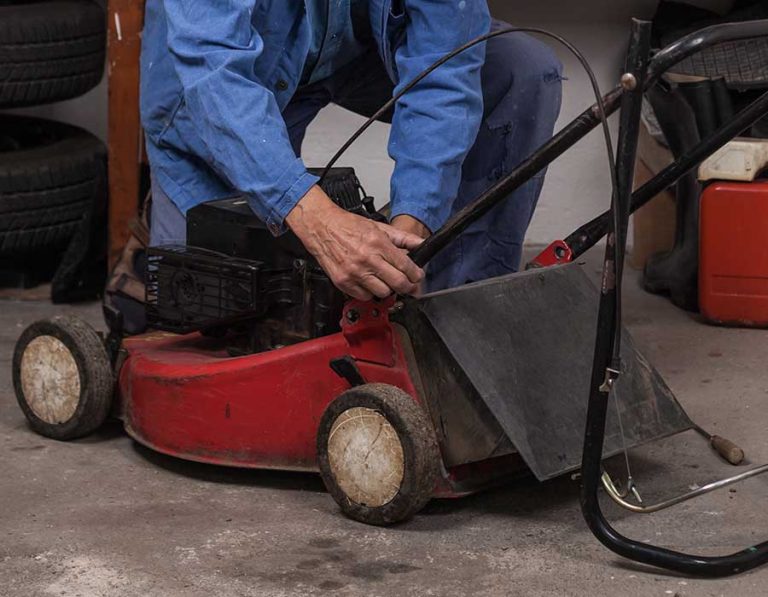 The lawnmower deck is the widest part of the lawnmower that prevents debris and particles from flying out. It also houses the blades and protects the operator and the engine mower from the particles. There are different sizes of the lawnmower deck, but they are generally made of corrosion-resistant metal. Reasons for needing to change… 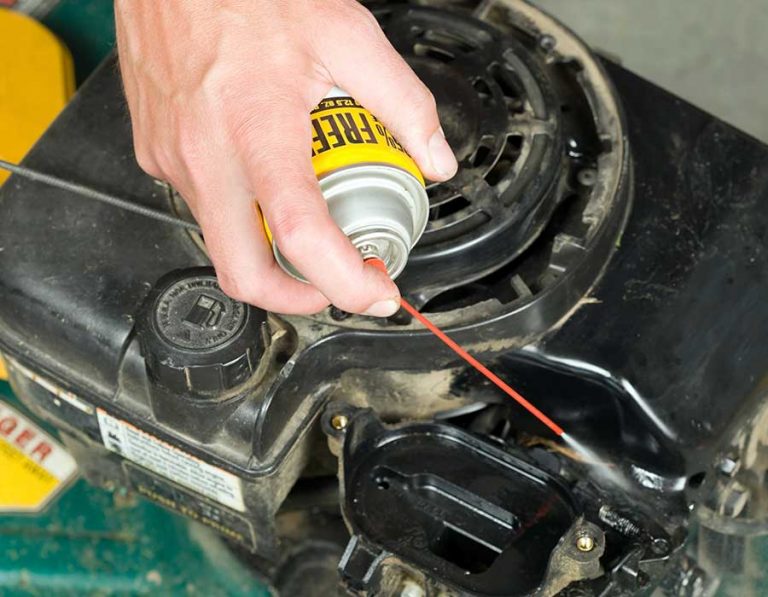 After leaving your lawnmower unused for a while, starting it can be a chore. You can also encounter issues with starting your lawnmower if it is old, not well maintained, engine blockage, cold weather, or other reasons- this is where the starter fluid comes in.  The starter spray is to be applied directly to the… 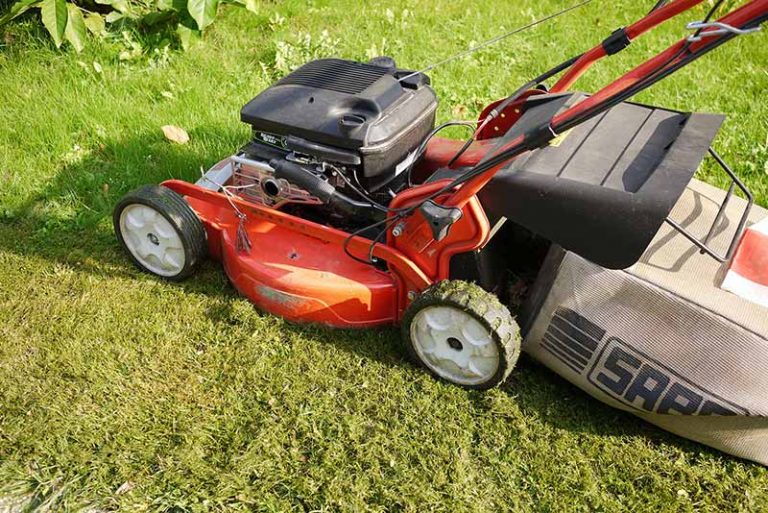 One of the most important elements of aftercare for new grass is knowing when to mow for the first time. Mow too soon, and you risk ripping up or trampling the tender seedlings before they’re established in the soil. Mowing too late, on the other hand, will leave you with too much foliage to take… Changing the drive belt on a MTD Yardman riding mower is a standard maintenance procedure. According to MTD, the maker of Yardman products, the belt should be changed every two years or more if it has significant use. Check the belt for nicks, wear, or damage on a daily basis throughout the mowing season. Pay…